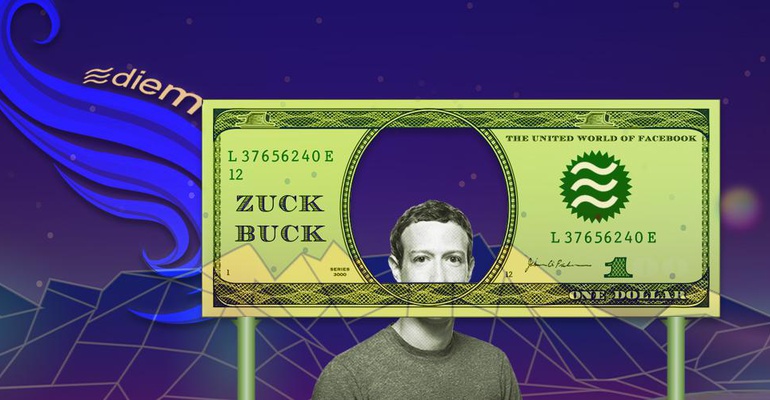 Meta is back. The company formerly known as Facebook now wants to issue “Zuck Bucks,” a virtual currency for use on its platform, alongside “social tokens” and “creator coins.” These would be rewards for users who were active on the platform, such as contributing to Facebook groups, the FinancialTimes revealed earlier this month.

The Zuck Bucks moniker is just an internal codename used by staff members, but the new push comes as Meta is still in the process of breaking free from the smoking rubble of his failed project Diem, envisioned as a global cryptocurrency that would run on a blockchain launched by Facebook.

Meta’s latest metaverse piece is significant – but not because of the project itself. A centralized in-game currency version might or might not be a success. But the very fact that Meta is experimenting with concepts like “social tokens” and “creator coins” could itself push these ideas forward.

After all, it’s happened once before: when Facebook’s ill-fated Libra project ended up creating a flurry of interest in stablecoins and central bank digital currencies.

Before we get to Libra and its unintended consequences, it’s worth remembering that this isn’t Facebook’s first rodeo with an in-app currency.

When Facebook was just a budding tech giant, it made money primarily through ads, but also through a payment business, using a product called Facebook Credits.

Facebook Credits were the currency on Facebook’s platform. If the developers who hosted their apps on Facebook wanted to charge their users, they had to do so by Facebook credits. They got 70 cents on the dollar and Facebook got the rest.

The Facebook Credits fueled the rise of successful startup game studio Zynga, a new kind of game called Farmville. Anyone could install and play Farmville on Facebook. But they could go further in the game if they paid for upgrades using Facebook Credits.

This was an all-new game model, and it presaged the “free to play” model of mobile gaming, where players could shell out more and more boosts and upgrades to progress through the game faster. .

The combination of Farmville’s “free to play” model has created a tidal wave of cash. In 2010, a year after testing Facebook Credits with Farmville, the game generated $500 million in revenuea third of which goes to Facebook through credits.

For a while, the payments industry worried that Facebook was eating its lunch. In theory, it could use Facebook Credits not just for games, but all apps built on Facebook, and maybe even things outside of Facebook with the help of its Facebook Connect system.

“If they can get 50 million registered credit cards, why don’t they use them to pay for your newspaper subscription?” Alex Rampell, who ran a company called TrialPay, said the New York Times in 2010. Rampell is now a general partner at Andreessen Horowitz, which specializes in payments.

But the day of Credits in the sun would turn out to be brief. The feature was responsible for 12% of Facebook’s revenue when it went public in 2012, but would be shut down the following year.

Facebook’s rationale was that pricing things in local currencies made more sense. But the stoppage of credits also coincided with new direction financial crimes regulator FinCEN around virtual currencies, including bitcoin, that year. It seemed like Facebook didn’t have the appetite for a regulated financial services company.

Six years later, Facebook would try again in payments, but with an even more ambitious idea: a stablecoin called Libra, which would run on its own blockchain.

By this time, Facebook’s blockchain skunkworks had grown from a solo operation under the responsibility of prodigy investor Morgan Beller to a full-fledged project led by former PayPal big boss David Marcus.

Libra made a flashy reveal, including powerhouse partners who have embraced his vision like Mastercard, Spotify, Uber, Coinbase, Mercy Corps and more. Facebook was starting to take virtual money seriously. But, ultimately, after the refusal of regulators around the world, the project was abandoned before a currency was launched and its assets were sold to a California bank.

Libra’s many regulatory pivots and acrobatics to try to stay afloat are now well documented. But even when it crashed and burned, Facebook’s efforts to dominate crypto left a lasting legacy: focusing the minds of central bankers and crypto engineers on the power of a global stablecoin.

At the forefront of institutions spooked by the emergence of Libra is the Central Bank of China. He was already battling a shadow banking industry through virtual currencies on platforms like AliPay. And it looked like Facebook was about to create a new payment system entirely beyond its control.

So, China has decided to jump into the Facebook game, launching its own digital currency in 2020. The head of China’s central bank’s digital currency unit said Libra was a key reason why he decided to launch the digital yuan, as a hedge against the unlimited reach of a corporate currency.

The advent of a digital yuan has sparked a race among central banks to create their own digital currencies. At first, these were small states, like the Bahamas with its ‘Sand Dollar’ project. But today the US Federal Reserve, the Bank of England and a consortium of Japanese companies are all working on digital dollars, pound sterling and yen. Libra may be gone, but the CBDC race continues to heat up.

The potential side effects of Zuck Bucks

While Meta’s next payments game promises to be centralized, ironically it could now be generating ripple effects in the crypto world.

So far, concepts like “social tokens” and “creative coins” have been incubated and tested by crypto projects like Roller, BitClout and others. But the relatively limited scope of these projects has limited their usefulness and growth. Meta could change all that.

If the platform’s billions of users are exposed to crypto-land concepts, the legacy of this latest iteration of Zuck Bucks could be a flow of users from centralized Meta platforms to decentralized crypto versions.

If this move by Facebook towards decentralized crypto projects happens, it would be the opposite of Libra, where a blockchain project sparked a race between central banks leading to the possibility of more centralized digital tokens. It would be an ironic reversal – and perhaps crypto natives would celebrate.